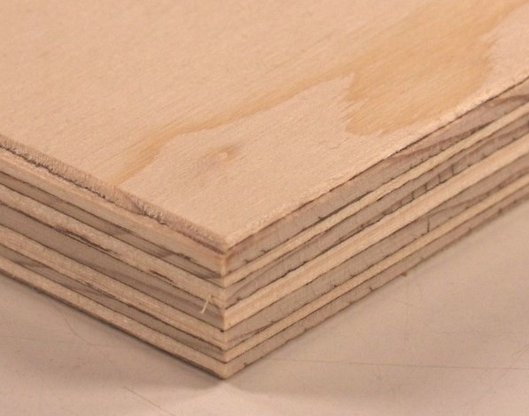 Tropical plywood was first developed in the eastern hemisphere, though has now become a worldwide commodity. In terms of its usefulness, it tends to lie somewhere in between softwood plywood and hardwood plywood. Its cost-effectiveness is generally determined by its region of manufacture, though costs are on the rise in many locations as a result of its increased demand in the midst of its slowly dwindling supply.

Tropical plywood is often referred to as “lauan,” a reference to the most common type of tree used for its manufacture in the Philippines. Although a number of tropical lumber species are now used in its manufacture, lauan was initially the exclusive choice for tropical plywood. This is because the Japanese loggers who lent a hand in the creation of tropical plywood during the 1930s found lauan trees to be both the largest and most common trees in the region.
Tropical plywood is manufactured in a time-efficient manner, using a rotary system that makes it easy to harvest several veneers from one tree in a short amount of time. Since a great deal of the manual labor involved in older manufacturing methods has been cut from the system entirely, the plies in a board of tropical plywood are more likely to be exact in size. This allows for both a cleaner look and a higher standard of quality.

Tropical plywood is known primarily for its strength and uniformity. Though once used primarily by Asian countries, its worldwide proliferation across multiple continents has led to a growing diversity in its range of applications. This range includes the majority of typical plywood uses, both industrial and construction-based. This means that, while often used in flooring, paneling and the creation of laminated veneer lumber, it can also be used for several other purposes.
The fact that tropical plywood is lightweight yet relatively sturdy, not to mention often affordable, makes it a favored construction material by many set-builders who work in the film industry. It is able to hold up during production, but also easy to strike sets and remove them from the soundstage with relative ease. Of course, the fact that it is dense in composition yet light in weight makes it useful for numerous other purposes as well. For instance, it can easily be used for shipping containers and for the lining of large truck interiors.
Tropical plywood has also seen many small-scale uses, due in part to the fact that so much tropical wood has been harvested around Asia. These uses include picture frames, musical instruments, and assorted arts and crafts.

Tropical plywood is used in Asia, Europe, Africa, and North and South America. Although the spread of its use has resulted in more trees from which to harvest lumber, its availability is still declining. As the amount of usable lumber goes down, the price in many locations is going up. While it is not impossible to find it for a fairly cheap price, tropical plywood that is manufactured to higher standards tends to cost a fair bit extra than that which is lower in quality.
As previously mentioned, a great deal of tropical plywood comes from lumber harvested in the Philippines. This is the primary reason for the steady decrease in availability. Other major sources of tropical lumber, such as Indonesia and Malaysia, are currently undergoing a similar problem. Even worse, it would appear that the problem is spreading. Indonesia and Malaysia were only instituted as common sources for tropical lumber because loggers needed a backup plan when they began to run out of trees in the Philippines. By the time they moved to Malaysia, loggers had already used up approximately four-fifths of the lauan trees in the Philippines as well as a great deal of their viable resources in Thailand.

Tropical plywood has a number of uses and is generally created to suit high standards of manufacture, but its price increases as it becomes harder to locate viable resources for tropical lumber. Many Asian suppliers of tropical wood are finding that the rates of deforestation are beginning to surpass the rates at which new trees can be grown. This puts tropical plywood in a shaky position within the plywood industry, making it difficult to assess its worth with any sense of consistency. Though versatile in its applications, tropical plywood can only grow so much in cost before people begin to feel that its disadvantages outweigh its benefits.